HostMonster are a hosting solution that were established in 1996. Since then they’ve been providing web hosting at affordable prices with the aim to get small businesses and individuals up and running.

They believe in honest practices, making their customers the heart of what they do. They claim that reliability is the key to success on the internet. I signed up to HostMonster’s web hosting to see if what they were saying was really true.

I’d heard of the name HostMonster before, but never truly paid much attention. Being one of the oldest web hosts around (before merging with EIG in 2015), I expected good things from HostMonster.

I couldn’t find much in the way of customer reviews for HostMonster. However, what I did find wasn’t promising at all. Although they only have 11 TrustPilot reviews, this averages out at 2 stars and claims the rating of POOR. 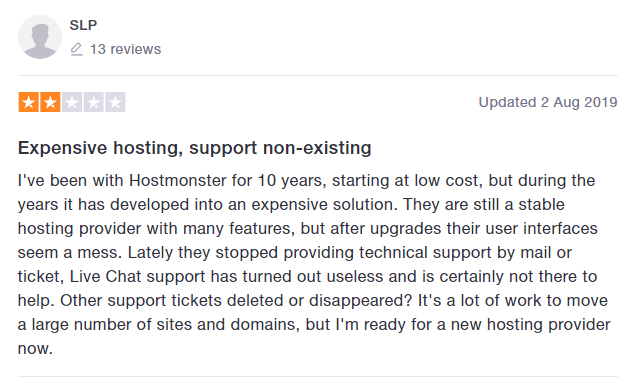 A lot of what I’m seeing is that people are unhappy with HostMonster’s customer support. It appears that they used to be a good hosting provider but things have slipped rapidly. Perhaps this is due to the takeover from EIG which seems to be a VERY common theme. 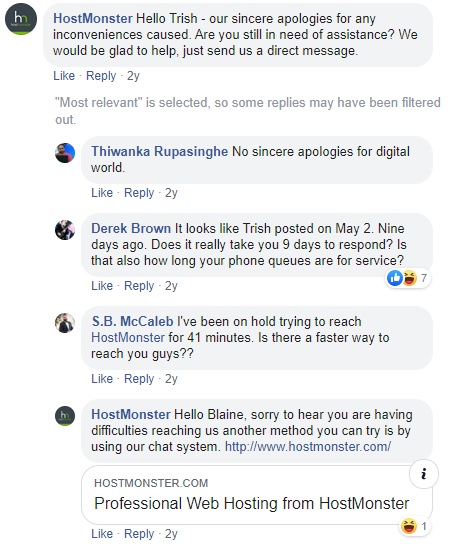 Their Facebook page seems to be inundated with negative comments. People are stating that they are waiting days for support responses, and over an hour waiting on live chat. 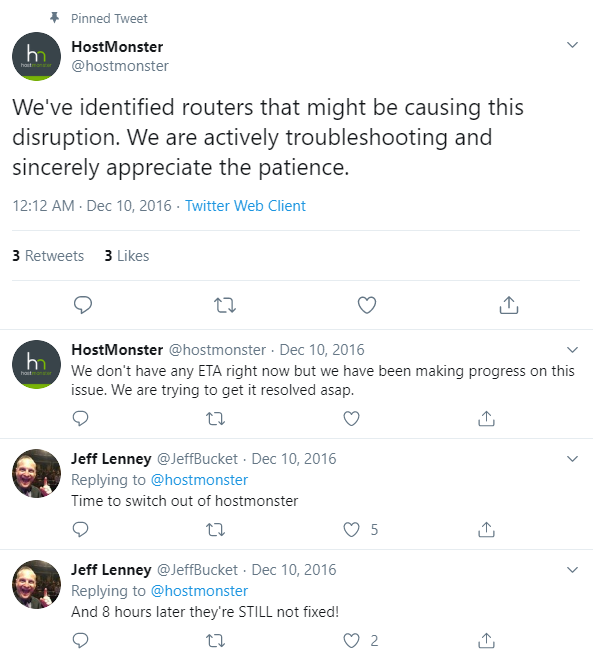 Back in 2016 it looked like HostMonster had LOTS of issues with their servers, according to their Twitter account. Even after 8 hours, these issues were not resolved and their customers weren’t being kept up to date with what was going on.

Unfortunately HostMonster don’t offer an uptime guarantee. They say that they do their best to maintain a solid network and server uptime, but don’t have any SLAs. The most frustrating thing about this is that because there is no guarantee, there’s no compensation when things go wrong.

Most issues are resolved in approximately 15 minutes. However, on extreme issues, it may take more than 15 minutes to resolve. In these extremely rare circumstances, the server may require additional time to resolve the issue. This can take several hours and in very rare cases as much as a day to get your server back up and running. 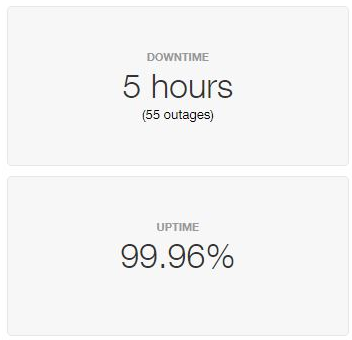 I monitored my test website with HostMonster which I signed up to. I did this over the space of 6 months and was pleased to get an overall uptime of 99.96%. This is just above the industry average, so they’ve passed that by the skin of their teeth.

HostMonster did pose some seriously disconcerting response times on my site. There were times the response time peaked to over 3 seconds which is very worrying. However, the average response time did settle down to around 700 ms which isn’t great, but it’s okay.

Moving on from their performance, HostMonster offer a broad range of standard features across their web hosting plans. These features are designed to create a “full web hosting solution” for both individuals and businesses.

Some of the main features that HostMonster boast about on their website include:

Each hosting plan offers something slightly different in the way of what’s included, but there are some decent features on all plans. Because HostMonster’s features are designed to suit individuals and businesses, you may see some here that you won’t find with other web hosts.

Given the very poor customer reviews surrounding HostMonster’s customer support, I was keen to test the waters. HostMonster have their own help center which contains articles and guides with answers to potential problems.

They also have a support page which contains U.S. and non-U.S. telephone numbers to get in touch. Alongside this, there’s a live chat section for each category of support, e.g. technical, sales, and billing. It was time to test out whether their support was really as terrible as people say. 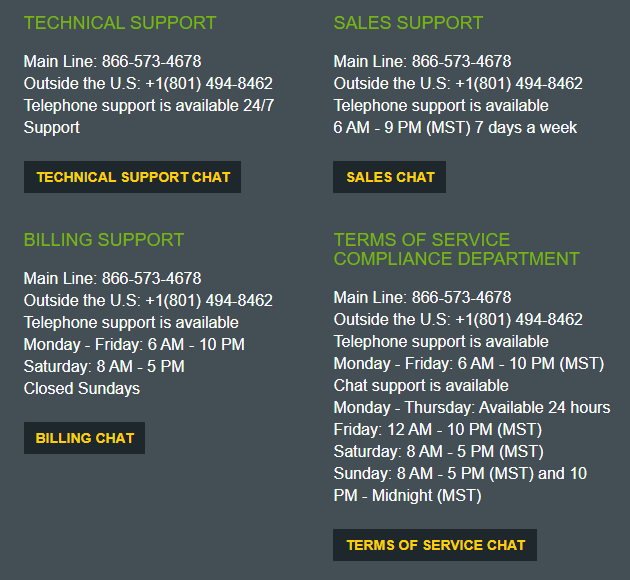 I started my live chat at 09:54 AM (GMT) and a support agent joined the chat within a matter of seconds. So far so good! It was quite clear that the agent was using a script as they tended to repeat themselves, however this wasn’t really much of an issue. 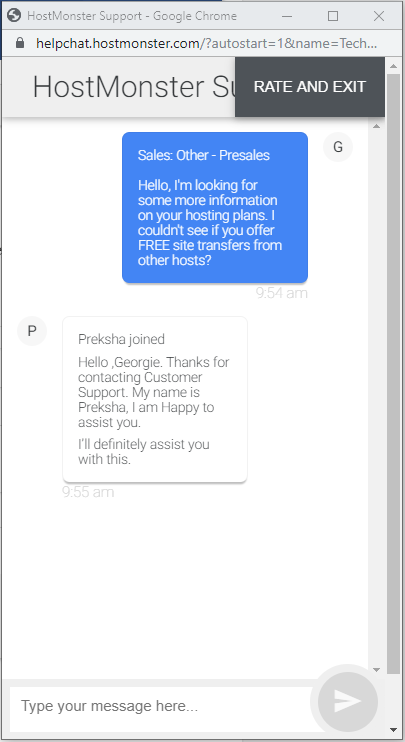 It was a real shame to find out that HostMonster DON’T offer free site transfers. Instead they charge a whopping $149.99 for the pleasure! This is a simple task that should come FREE with all hosting providers in my opinion. 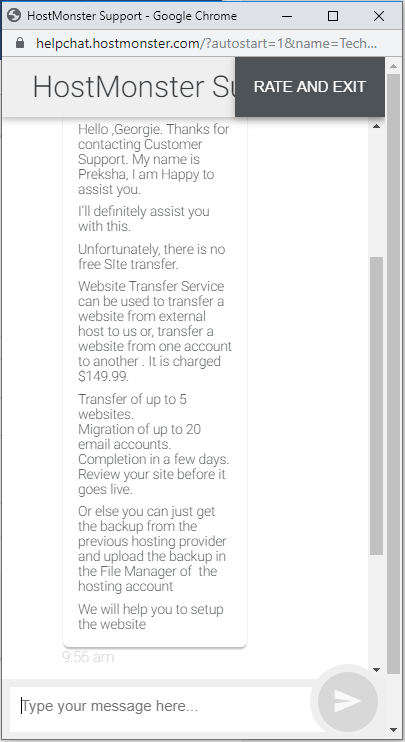 I also asked the agent about their non-existent uptime guarantee. I questioned whether there was any compensation for downtime, but again the agent just copied and pasted a script which didn’t actually answer the question. 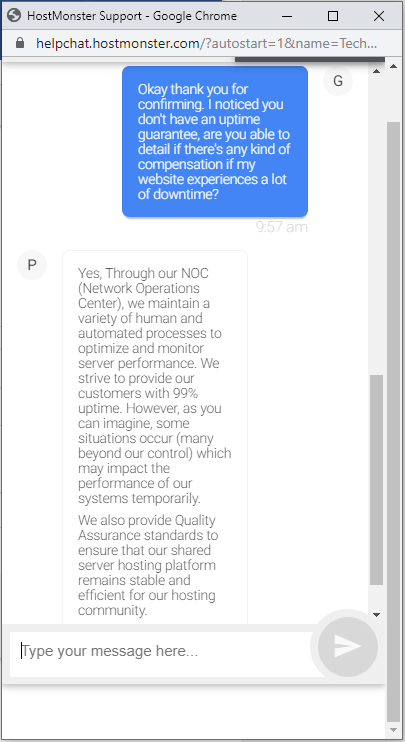 Whilst HostMonster seems to have had some bad press, I haven’t had the worst experience with them. In fact, I think they offer some pretty good features! Their uptime and performance on my own test website wasn’t anything to grumble at.

Admittedly, I’m not sure I’ll be raving about HostMonster for years to come. Let’s take a look at my own pros and cons of HostMonster.

Uptime: Although HostMonster don’t offer an uptime guarantee, my experience with them offered an above average overall uptime. My site’s uptime totaled 99.96% which is better than the average 99.94%.

Security: When you sign up to a hosting plan, you’ll get a free SSL certificate. You’ll also get some decent security tools like Hotlink Protection, SpamAssassin, SSH access and backups.

Afforadable: Overall, HostMonster is an affordable web host. Their Basic plan offers 50GB storage space and unmetered bandwidth, all for £3.86 per month.

Customer Support: I know I didn’t have a very bad experience with HostMonster’s customer support, but other people did. I also found that their support wasn’t very personal, and they clearly use lots of scripts that get copied and pasted.

Response Time: My average response time was about 700ms. This is under 1 second which is great. However, my site’s response time peaked at over 3 seconds on a few occasions which is extremely worrying as this will certainly deter potential visitors.

Their hosting plans are actually very reasonably priced. They all offer a generous amount of storage space and unmetered bandwidth. The Plus and Choice Plus plans also offer a few extras which include:

Do I Recommend HostMonster?

I’m not sure that I can recommend HostMonster. Whilst their pricing is quite affordable, they use some of the common tricks in the web hosting book. This is that their prices are cheaper if you sign up longer, and they increase at renewal.

Their performance was underwhelming, and their response times concerned me. Coupled with the poor customer reviews, I don’t feel like I can trust HostMonster to provide me with a reliable and powerful web hosting experience. However, they do have some good points.

Here’s a quick summary of HostMonster:

FREE SSL certificates (this is included on all pricing plans)
Decent uptime (99.96% in my own tests, but no uptime guarantee)
Unmetered bandwidth (as well as decent storage space even on their basic plan)
Affordable pricing (their highest tier plan is only £5.41 per month)