Arvixe are an American based web hosting company, founded in 2003. They claim to offer reliability, quality and affordability, with web hosting plans as low as $7 (£5.43) per month. They state they have won some of the most prestigious awards in the industry, painting a picture of what they call the Arvixe Advantage.

When a company makes so many positive claims about themselves, it’s important to find out whether those statements are actually true. What better way than to see what REAL customers are saying about Arvixe. I’ve trawled through customer reviews of Arvixe to paint you a picture of what they’re really like.

I went over to Arvixe’s TrustPilot page and first impressions were NOT good. There were only 87 reviews when I checked, so I had to take the comments with a pinch of salt as there’s not enough to go on here.

There were many comments regarding Arvixe’s customer support. It would appear that even though people thought their services were okay, the support tipped the scales for most. 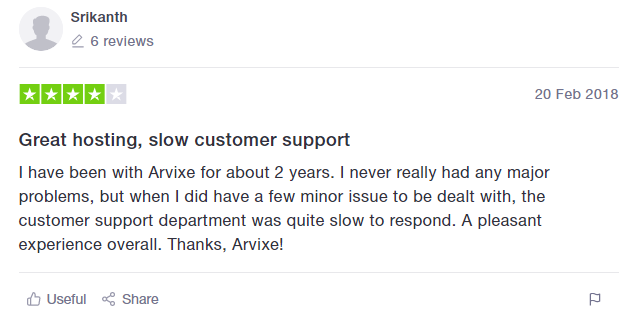 As above, the customer has confirmed the hosting services are good but the customer support was on the shabby side. This doesn’t look too hopeful at this point!

Arvixe offer their customers a 99.9% uptime guarantee. On the whole that’s not a great uptime in the first place, so hopefully one that isn’t hard to achieve.

If during any month, we do not live up to our 99.9% uptime guarantee, you qualify to receive a credit on that month’s hosting fees. 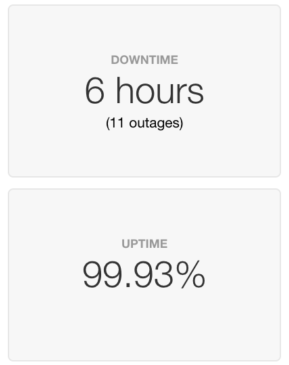 After signing up to Arvixe and monitoring my WordPress site with them, I was pleasantly surprised by the results. I achieved an uptime of 99.93% which exceed their SLAs.

Even though me and my site visitors would be based in the U.K., I was impressed with my site’s response time. Arvixe’s servers are U.S. based but my response time averaged out at 520ms which is GREAT!

Arvixe offer various web hosting plans. For the purpose of this review, we’ll be looking at their Personal Class (shared hosting) Linux hosting.

Included in their Personal Class plans, you’ll get the following benefits:

As far as shared web hosting goes, that’s pretty generous on the whole. Whilst their shared plans don’t include an SSL certificate, they do offer other features which might tip the scales.

Let’s take a look at some of my favourite features that Arvixe offer:

Being based in the U.S., I was initially dubious about Arvixe’s customer support. More so because of the reviews I’d seen from other customers. Arvixe’s Support Center had a large knowledgebase full of information. The information was carefully categorised so you could locate what you’re looking for with ease. 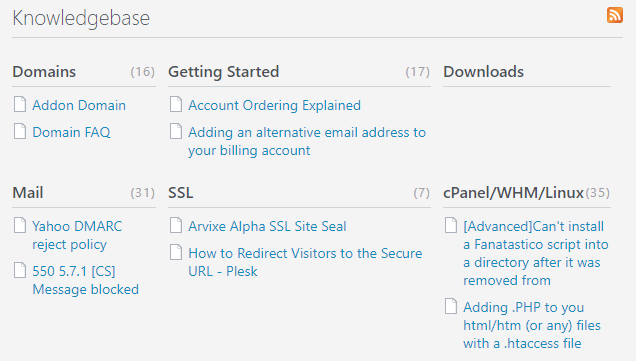 Everything was located in one place. If you wanted to login to your account, you can do so from the same place within the Support Center. Next I wanted to try out their live chat service which was showing as online in the U.K. at 11 AM GMT. 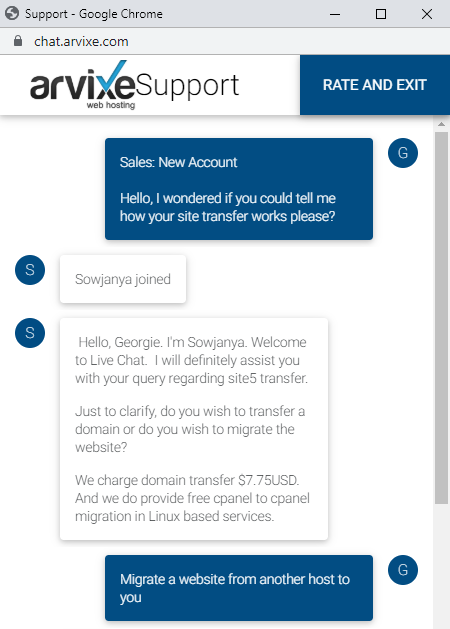 The live chat was initiated within a matter of seconds. The agent responded to my question very quickly and efficiently. To be honest at this point, I can’t see any reason to complain (maybe I was lucky with my experience).

I asked about their acceptable usage policy which the agent answered quite briefly. If I was being picky, I’d say maybe they could have elaborated on this a little more rather than saying “basically there are no limits”. When I checked their policy the limits outlined were:

Being that Arvixe was acquired by EIG, I was hoping there would be a lot more pros than cons to their web hosting. You know me, I’d rather be proved wrong, especially when there were SO many bad reviews about Arvixe.

I signed up to one of their shared hosting plans and monitored my performance with them. I’ve tested their customer support, live chat, and more to give you a REAL look into their pros and cons.

Uptime: Whilst I didn’t experience the BEST uptime with Arvixe compared to some other hosts, it wasn’t bad either. Their SLA is 99.9% and my site achieved 99.93% uptime over the space of 6 months. Like I said, not overwhelming but not disappointing either.

Unmetered: Both their storage and data transfer is unmetered. This means, within limits to their acceptable usage policy, you can upload as much data to your site as needed, as well as traffic.

Features: The features that are included in Arvixe’s basic plans match those that some web hosts offer on their advanced plans. Features like unmetered bandwidth and marketing credits are a real bonus, especially when you’re only paying a fiver each month.

Pricing: Arvixe’s pricing is quite expensive compared to other hosts. For example, their cheapest plan is £5.43 per month. This is a lot compared to the likes of SiteGround, BlueHost, and iPage.

SSLs: SSL certificates are NOT included for free. Again, most other web hosts include a free SSL certificate, and I would expect more considering the price.

Arvixe offer 2 Linux pricing plans. The only REAL difference between the two is that the Pro plan supports unlimited websites, whereas the standard plan only supports 6. There’s $3 per month difference in price, but apart from that, they’re the same.

Do I Recommend Arvixe?

This is a bit of a tough one. Yes, I do recommend Arvixe as a web hosting provider. Whilst their uptime wasn’t THE best I’ve encountered, it wasn’t the worst. Their performance was reasonably stable in my own tests, and there were good results despite their servers being based in the U.S.

If you’re looking for a long-term web host, I wouldn’t recommend Arvixe. Why? Because their pricing is very expensive compared to other hosts who actually offer MORE. Their unmetered disk space and bandwidth is great, but their extras like marketing credits are available to U.S. and C.A. customers only.

Here’s a quick summary of Arvixe:

Good uptime (my own results showed they met their uptime guarantee)
Unmetered bandwidth and storage space (no real limits if you keep within their acceptable usage)
Fast customer support (whilst it wasn’t the most personal experience, they responded quickly and efficiently)
Features are plentiful (they include 1-click installs, backups and DDoS protection)

Marketing credits only available to U.S. and C.A. customers
Too expensive compared to other hosts who offer more