Starting a blog sounds like a great idea (and it is)! But knowing where to start is often the difficulty according to what people tell me. I often find inspiration from other great and already successful blogs can spur on some creativity!

There are absolutely millions of blogs that exist on the internet. Many have been created and have dwindled off the radar due to bloggers becoming disinterested. However, there are plenty of very successful blogs that are still growing and making money for their owners.

Blogging is about creating content that makes people want to keep coming back. If you can create a blog that offers relevant content, shareable content, and provides useful resources for others, you’re going to be successful. Bloggers that make the effort to keep their blog updated whilst providing a good user experience (like keeping your WordPress up to speed) are the ones that are still alive.

I’m going to show you 21 examples of successful blogs that all provide something different to their users. Some blogs can make literally thousands of pounds/dollars a month and provide their owners with a steady income. I hope this list can provide you with some inspiration to start your own blog, or continuing to work hard on your existing blog.

Tuts+ was founded in 2006 and provides useful tutorials and content for web designers. If you’re looking into how to learn coding, this is a very valuable resource and helps designers worldwide. Their marketplace currently servers over 2,000,000 customers buying web templates and tutorials.

This blog is successful because they provide relevant content to their target market. Their income mainly comes through their memberships and the commission the receive from sales. Of course, when they first started, Tuts+ wouldn’t have just had cash handed to them on a plate. They’ve continued to work hard and provide insanely digital goods across their platforms.

Smashing Magazine was also founded in 2006 (like Tuts+). Founders Sven Lennartz and Vitaly Friedman created the blog to help those interested in web design and web development. They provide content that’s relevant and useful to those looking to learn more in these fields with articles, books, events, and even jobs.

In 2012 Smashing Magazine started hosting web development conferences. These take place worldwide and offer material from big sponsors in the tech industry. Smashing Magazine’s primary income comes from their memberships. Users can sign up to their subscription and have access to a wealth of tutorials from just $3 per month.

Gizmodo launched in 2002, mainly focusing on design and technology. Gizmodo became popular very quickly, and it’s for this reason that they decided to make their blog multi-lingual. It offers translated versions of its content in a variety of languages including French, Spanish and Portuguese.

Gizmodo’s fortune mainly comes from advertising. Their homepage isn’t packed full of adverts but you will find they tend to repeat themselves in smaller formats. Advertising is often based on your search or purchase history, aiming adverts at customers that are relevant and don’t appear ‘spammy’.

Perez Hilton is well known for his controversial gossip, and the apple doesn’t fall far from the tree on this blog. The blog is run by Mario Armando Lavanderia Jr who had dreams of becoming an actor. Unfortunately that didn’t work out for him, but blogging definitely did!

Lavanderia earns most of his income through advertising on his blog. Popularity continues to grow as he makes regular appearances on TV as a celebrity gossip commentator. It’s estimated that he earns over half a million dollars per month through his blog alone!

Mashable was started in 2005 by Pete Cashmore. Cashmore was dedicated to producing consistently great content on a regular basis. The blog offers entertainment, technology, science and cultural news. There’s also sections on lifestyle, parenting, science, deals, and a shop page. 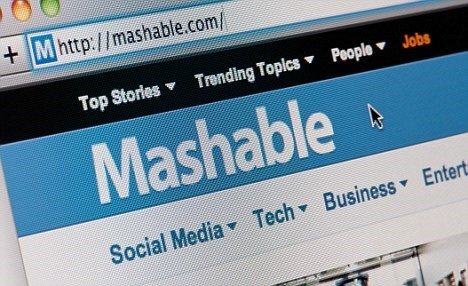 Mashable continues to grow by reaching out to its readers. They have a large presence not only on the Internet but also through social media. Mashable’s fortune comes from its advertisements on its blog, making over $2,000,000 per month.

For those of you that have never heard of Moz, it’s probably the most popular and valuable blog about SEO. Rand Fishkin started his venture out as a family-run business focusing on design. It soon turned into an SEO shop, but the blog was what gained it’s massive audience that still stands strong today.

Moz’s income comes primarily from website memberships. As a member of Moz, you’ll have access to professional tools to help you with your own website’s SEO journey. There’s a wealth of material and resources accessible to ensure that you know everything there is to know about search engine optimisation, how to increase your reach, and much more.

Launched back in 2005, Huffington Post (known as HuffPost or HuffPo) provides a unique view on news and politics. Arriana Huffington sold the blog in 2011 for a whopping $315 million to AOL. HuffPost is an American news blog, edited from a Liberal perspective and covers topics including politics, entertainment, technology, lifestyle, comedy, and local news.

HuffPost makes it’s millions from sponsored advertising; you’ll notice on their website they have banners and digital ads. Huffington Post is probably the most successful blog of it’s kind and time. It’s value to date is over $1 billion which is incredibly impressive compared to other news blogs that exist.

Started by the same guy that setup Gizmodo, Engadget has proven to be wildly successful. Engadget provides it’s users with technology advice and reviews on tech and electronics. The blog was sold to AOL in 2005 and has been run by them ever since. Engadget covers the likes of technology gear, games, entertainment, videos and reviews.

As do many other blogs of it’s kind, Engadget makes a large profit from it’s advertising. Because of this, it can employ content writers and editors that are able to write about about everything technology related. They can research the latest gadgets and provide daily news and reviews to keep their users interested.

Chris Coyier created his design blog called CSS Tricks. He’s one of the most well-known designers on the internet to date. CSS Tricks was started in 2007; at the time it was solely focused on CSS (hence it’s name). Today, CSS Tricks is a library of resources for web design and web development. It’s really easy to visit the blog and copy lines of code to use in your own website.

There’s plenty of resources to make use of, including CSS, Sass, HTML, JavaScript, JQuery, and PHP. CSS Tricks uses it’s existing user base and audience to launch new products, blogs, and companies. One of their websites, CodePen, has over 1 million users. In fact, CodePen has double the amount of traffic compared to CSS Tricks.

CoinDesk is one of the leading Cryptocurrency blogs around, in fact it’s probably the most successful one. CoinDesk receives a whopping 10 million visitors per month which is what makes them a leader in the industry. The blog was started by Shakil Kha in 2003; it was bought by Digital Currency Group in 2016 for around half a million dollars.

CoinDesk makes it’s millions by being the main source of Cryptocurrency news and updates. Their income mainly comes from advertising on their website and paid reports. They also sell tickets to the conferences that they hold, which of course makes quite a nice sum.

Pat Flynn, owner of Smart Passive Income, has been blogging for almost 10 years. The aim of the blog is to provide people with easy techniques to running a business online in order to earn passive income. If you’re looking to run a blog as passive income, this is the place to learn and make use of proven techniques.

Most of Pat’s earnings come from being a BlueHost affiliate, as well as using other email marketing tools. His advertising income comes from his Podcast, as well as Google ads on the website and blog.

The blog Making Sense of Cents is aimed at teaching you how to save money effectively. Michelle Gardner focuses on how to be frugal in order to lead a better life, showing people that managing your finances can actually change your life. Initially, the blog was set up because Michelle herself wanted to improve her own financial situation.

It’s reported that she paid off her student loan of almost $40k by less than a year of online business. Her articles cover how to earn extra income and how to be in control of money, including emotional spending (which I’m sure we all do). The blog earns it’s income from advertising and affiliate accounts.

Pinch of Yum is primarily a food blog, showing images of delicious food alongside recipes. Food blogs tend to be fairly popular as they have a large reach and most people can relate to them. Lindsay Ostrom (owner of Pinch of Yum) has already made six figures from her blog through her love of food photography.

Lots of Lindsay’s traffic comes from social media sources like Pinterest and Instagram, both of which are image heavy. She has over half a million Instagram followers which is incredibly impressive. Pinch of Yum uses both advertising on it’s blog as well as affiliate marketing with the likes of BlueHost and Amazon.

Abby, who owns Just A Girl And Her Blog, writes about all things DIY, home decor, and home organisation. In recent years, this topic has become quite popular, as I’m sure you’re aware if you caught Netflix’s Tidying Up With Marie Kondo. Abby pushes a focus on the things that we easily miss in our everyday lives at home, showing visitors how they can improve their homes whilst enjoying making it so.

Abby posts regularly on her blog, keeping her readers entertained. She makes an enormous $35k per month, just a few years after the blog started. What makes her blog so popular is that she puts things in simple terms, allowing the likes of anyone to be able to understand her point of view.

Back in 2012, Alexa started a blog called Single Mom’s Income. The purpose of the blog was to give others a view into the life of a single mother living from paycheck-to-paycheck, and how to break the cycle. After Alexa got divorced, it spurred her on to get out of her daily rut and inspire others. She now receives over 150k monthly visitors. 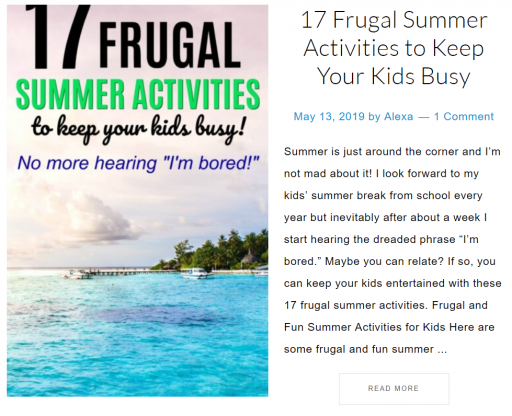 Alexa talks about her life experiences and how people like her can make money without the usual 9 to 5 full-time job. There’s plenty of opportunity out there, including part-time jobs, side jobs, and freelancing. The blog’s main income comes from advertising and freelancing products/services.

True Valhalla creates and sells HTML5 video games. Matthew designs all of his games from scratch; in order to make money, he sells the right to the games to other gaming portals. True Valhalla truly shows you that anyone can make money online if you set your mind to it. Finding your own niche is a good starting point! 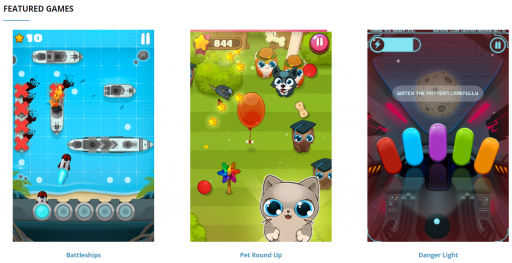 The income from the blog can be quite up and down; some months Matthew can earn up to $30k per month. Matthew earns a small amount of income from advertising on his website, but the majority of his revenue comes from selling his products and services. 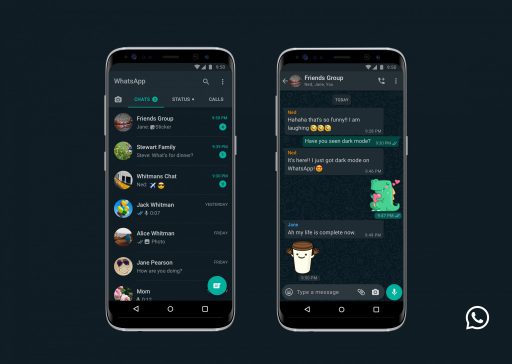